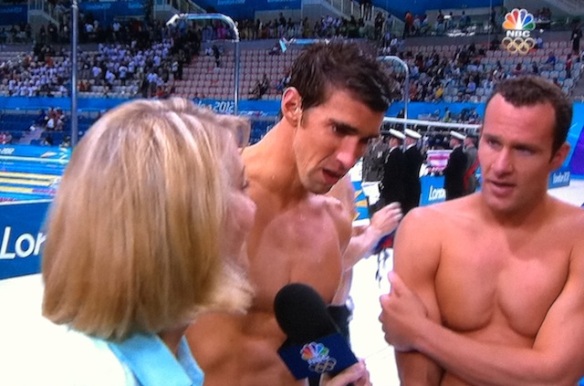 We’re as confused as you Michael.

There has been a lot made of the use of post-race interviews at the London Olympics and how successful they’ve been. I’m happy to acknowledge how much insight they bring, I’m not sure if I like the way they are being done though.

I understand Giaan Rooney asking James Magnussen if he feels disappointed. What I don’t get is why she did it three times in three separate ways, yet seemed surprised when she ended up with the same answer on each occasion.

I love the style of Tony Jones. He looks like he fits, he knows how to get interesting information out of an athlete and leaves us with just enough information that we’re craving more at the end of the 45 second slot.

I’d love to say that there is a fine line between what the two are doing, but it’s a line thicker than the divide between Australia and New Zealand on the medal tally before we were able to add two Gold’s this morning to pull us level with our neighbours.

Jones is a near thirty year qualified veteran, while Rooney is the typical “athlete who has enough insight to land her a gig, even though there are others more deserving” journalist. As someone who has (and still is) working hard to become the sort of Journalist that Tony Jones is, I am ever frustrated by the likes of Rooney and Hackett, even though I know why the networks choose them, a decision which very rarely fails.

Before I go any further I’d like to clarify I have no problem with Giaan, she’s a great person who on every encounter I’ve had with her she has been up for a chat and offered great  insight into the Swimming . My frustration comes from knowing that she’s doing what she’s instructed to do by Nine, yet at the same time has the capabilities to do much better than she is.

One of the first things I learnt at University was to ask the obvious questions first. I’m not a huge fan of saying “A big loss out there, must not feel too good?” but you never know what you are going to get from an athlete and something they say can be used as a lead-in to a more in-depth question. For this reason and the fact that the majority of athletes have ZERO media qualifications, I respect the way that they are going about their business.

Sure, ex-athletes are given media training, but that’s a different beast to being qualified. With the  time that they have on their hands, perhaps the organisations employing them should mandate them becoming qualified as  it is only going to strengthen their overall product.

So how do we get rid of those predictable post-event interviews ? A network hires the ex-athlete because of the knowledge that they have, so why isn’t that knowledge being used in these interviews ?

If I’m poolside talking to James Magnussen here’s what I’m asking him:

There is a lot more I’d want to ask him, but given the time constraints I wouldn’t have the chance. End result, an interview with insight into how he raced as opposed to how he is feeling after it, which is all that most people want.

And what’s to stop Rooney asking all of those questions ? Absolutely nothing. She just didn’t know what to look for and the public backlash may see her not have another chance, with the role potentially going to another in Rio should Nine have Free To Air rights.