As soon as Sam Allardyce was sacked West Ham fans were told they needed to be careful what they wished for. Allardyce promoted stability – something which a mid table club should apparently aim for. Slaven Bilić had great experience in Europe but was yet to manage in England.

West Ham fans were on the hunt for one thing in their new manager – someone who played the exact opposite style of football as to what was served up under Allardyce.

Bilić has done the first thing that what asked of him. His side plays with flair, they aren’t scared to try new things and 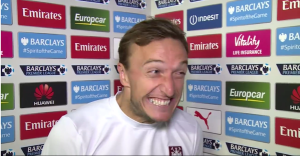 most importantly it’s exciting to watch. It’s the West Ham way, without which the club wouldn’t have the rich history they do.

Three wins and two losses to this point is unsurprising. What is surprising is that two of the victories have come away at Arsenal and Liverpool.

The common theme in those two victories was going out with everything to play for and the knowledge that the side was good enough to win. In the Allardyce regime the mentality would be to try to hold on for a 0-0 draw, a mentality that often ended in tears (see the back-to-back losses to Chelsea and Arsenal that sent the season spiraling last year).

On Saturday we travel to Manchester City with the belief that we’ll be the first team to a) score against them and b) take points from them this season. One point? Three points? I don’t see why we can’t take three, they’ve had a midweek game and are coming off a loss.

The two David’s have finally realised that results come when you open your wallet. The club will post a loss for the financial period but in doing so have purchased players who can bring the club into a new era.

The move to the Olympic Stadium is huge in many ways. Have on-field success and the sky is the limit. Have a bad year and we’re constantly battling to get ahead upon entry into the new stadium. This is a statement year for the Hammers and every statement thus far has been positive.

The departure of Kevin Nolan was met with glee by some fans, but it is fair to say that he was a victim of being a long-time staffer of Sam Allardyce. The negative football and defeatist attitude had been fed to him for far too long. I feel there was a role for him in the team, however his departure lead to the biggest victory of the year.

Mark Noble. Captain of West Ham United. I remember saying as early as 2010 that he had captain written all over him and could be the greatest player the club has had in my lifetime. He’s an East End boy, his blood truly is Claret and Blue, and more importantly he is everything that the club are trying to be. His goal and celebration against Liverpool, his rush to Payet after the opener against Newcastle and THAT face during his WHUTV interview after we’d beaten Arsenal are further proof he’d die for the shirt.  Sure we could have offered Song or someone else the job (and I’m not for a second suggesting that Song doesn’t love the club), but nobody fits the role more than Noble.

The season is still young and there is a lot of football left to be played. In saying that I don’t know anyone who hasn’t got what they wished for.

The Williamstown Seagulls are through to their sixth straight preliminary final, a tally unmatched across the Victorian Football League. Their seven point victory against the Sandringham Zebras was enough to send the blood pressure of Seagulls fans through the roof. How did the emotions play out?