The Melbourne Aces last week announced the signing of Tommy Thompson as their new manager for the 2014-15 Australian Baseball League season.

Thompson is the current manager of the Class A-Advanced Winston-Salem Dash, who are an affiliate of the Chicago White Sox. He comes to Melbourne with a decade of playing experience in the minors, as well as spending twelve years as a manager. 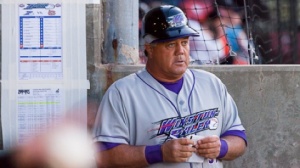 Thompson replaces Phil Dale, who had been at the helm of the Aces since the formation of the league in 2010, leading the Aces to a regular season record of 76-100 (.431) with two playoff appearances in that period.

In his managerial career, Thompson boasts a .486 record (616-651 at the time of positing). While the sample size is much bigger, it doesn’t read much better, with just four seasons with a winning record throughout his career.

When you break down Thompson’s record further, at the four different levels of baseball he’s managed his only  overall winning record comes at Class A-Advanced, where he has a record of .530. With many experts believing the Australia Baseball League floats between A and AA, replication of these numbers will see the Aces make a playoff appearance for the first time since losing the 2011-12 ABLCS to the Perth Heat.

The Aces have just two playoff appearances in the four-year history of the league. Tommy Thompson has led a side he has managed to the playoffs just three times in his twelve years calling the shots from the dugout.

Despite only leading teams to the playoffs at a rate of once every four seasons, he does have a title to his name, after he took the Frederick Keys to the Carolina League title in 2007. The title came on the back of a ten-year break for Thompson, who had last managed the Sioux Falls Canaries in 1997, lasting just 36 games after the side started the campaign 13-23, seeing Thompson relieved of his duties.

One advantage Thompson will find in the ABL is that with half of the teams in the league making the playoffs, the bar is lower, with the lowest winning percentage to ever make the playoffs being a staggering .444, which three teams were tied on in the 2011-12 season. As a manager, Thompson has a record of above .444 on eight of twelve occasions, a stat which should bring a smile to the faces of Aces fans.

Several Aces fans have already discussed the importance of Thompson being a long-term option at Melbourne Ballpark, however history suggests that he may not return for the 2015-16 season. Thompson has three stints longer than a year as a manager, but only one of those stints occurred over consecutive years (Frederick 2007-2008).

One thing is for sure, the Aces spared no expense in getting their man. A worldwide net was cast, and Thompson the fish caught. It is undeniable that his connections through the White Sox organisation and the entire game of baseball will benefit the Aces not only off the field, but also leave them in the position to push for the elusive Claxton Shield title.