We’ve all heard how Richard Sherman likes the sound of his own voice, but his post game interview after the Seahawks beat the Niners to make to Superbowl? That takes the entire proverbial bakery. 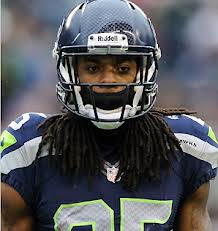 It’s not new information that Richard Sherman isn’t everyone’s cup of tea. He speaks his mind, often thinks he is bigger than the game, and is in no way going to let someone get the better of him. But you know what? He’s earned the right, so let us all enjoy what I’m thinking is going to be the best interview of 2014.

He was in the crucial spot with 22 seconds left and was able to tip a pass away from Crabtree leading to an interception that clinched the game for the Seahawks, leading to their first Superbowl appearance in eight years.

Sports fans are a horribly fickle bunch at the best of times, and are often torn between athletes who are going to toe the company line, and are willing to let it all out because they’ve done something that then backs up what they are about to say, and you know what? He did just that when he dominated Michael Crabtree, who had previously discussed his belief that Sherman wasn’t as good as he was cracked up to be.

Naturally, when Sherman was given the chance to discuss this after the game, he made sure he mentioned what he thought of what Crabtree had to say about him.

Say what you want about it, but Sherman did what I like. Told it as he saw it and at the end of the day he is playing in two weeks time while Crabtree and his buddies are playing golf. That win gives him bragging rights over an opponent who directly stated how much better he was than him but couldn’t come up with the goods when it mattered. More of the same thanks.